skip to main | skip to sidebar

Jeff Barry: The Man and His Music

Award-winning composer and producer Jeff Barry will be making an appearance at a special screening of The Wrecking Crew movie this evening (Saturday, February 9, 2013) at the Saban Canyon Club in Beverly Hills. The function is being held in honor of legendary drummer Hal Blaine, and 50% of proceeds will benefit the Sweet Relief Musicians Fund. Doors open at 6:00 p.m.; the event begins at 8:00. For info and tickets, please visit this page on the Wrecking Crew Film website.
Posted by Laura Pinto at 9:39 AM No comments:

April 3, 2010: On this date in 1938 (hey, that rhymes - how appropriate!), Jeff Barry was born in Brooklyn, NY.  By 1960, that little baby had grown up and made a name for himself with his very first hit record as a songwriter, "Tell Laura I Love Her," recorded by Ray Peterson in the States and taken to #1 in the U.K. by Ricky Valance.  After this, the hits just kept on a-comin', from the dozens of "girl group" tunes he wrote with then-wife Ellie Greenwich to his work with The Monkees and The Archies, from Robin McNamara and Bobby Bloom to The Klowns and The Illusion, from his fun, singalongable TV theme songs such as "Movin' On Up" from the Jeffersons to his smash hit "I Honestly Love You," written with Peter Allen and taken to the top of the charts by Olivia Newton-John.  In 1991, Jeff Barry and Ellie Greenwich were inducted into the Songwriters Hall of Fame; and, in 2010, the team became inductees of the Rock and Roll Hall of Fame as well!  Happy birthday, Jeff, and congratulations!

The Story Behind the Song

Jeff Barry is one of a host of top songwriters featured in The Story Behind the Song, a new book in the Chicken Soup for the Soul series.  This book focuses on how, when and why 101 of the world's most popular tunes came into being, with composers sharing their inspirations and influences.  Jeff gives readers the history of one of his personal favorites, "Walkin' in the Sun" - which as dedicated Jeff Barry fans might recall was inspired by his father - as well as his first hit as a songwriter, "Tell Laura I Love Her."

The book was written by Jo-Ann Geffen along with veteran Chicken Soup for the Soul authors Jack Canfield and Mark Victor Hansen.  Foreword is by Lamont Dozier (from the prolific hitmaking team of Holland-Dozier-Holland).
Posted by Laura Pinto at 8:47 PM No comments:

Jeff Barry in the Rock Hall!

CONGRATULATIONS to Jeff Barry for his induction into the Rock and Roll Hall of Fame! Jeff, along with the late Ellie Greenwich, are among those slated to receive the Ahmet Ertegun Award (nonperformers) at the Rock Hall induction ceremony in March of 2010. Other recipients include fellow Brill Building songwriters Barry Mann and Cynthia Weil. Inductees in the artist category include ABBA, Genesis, and The Hollies.

For the complete listing of 2010 inductees, visit the Rock Hall official website.

Way to go, Jeff - this is an honor well deserved!
Posted by Laura Pinto at 6:19 PM No comments:

Here's a cool post from the On My Mind blog, showing Jeff Barry being featured in an Archie comic from 1969.

Thanks, Rick, for posting this!
Posted by Laura Pinto at 5:40 AM 1 comment:

The man himself, Jeff Barry, has a birthday coming up in just a couple of days - April 3rd to be exact! If you would like to post birthday greetings for him, please head on over to the Jeff Barry fan site message board (that link will take you directly to the birthday thread, where you can add your wishes to those already up there). Jeff's hitting a milestone this year, so, if you love his music (and who doesn't?), then please take a few moments of your time to wish him a happy.

By the way, my goal is to get Jeff inducted into the Rock and Roll Hall of Fame before his next birthday - this is an honor he truly deserves. (Click HERE to see why.)

Back in the late 60s, Jeff Barry and Andy Kim joined forces to write and record many of the songs we love today - including "Sugar, Sugar," which was a #1 hit for Ron Dante and The Archies. This week, Michael Godin from Treasure Island Oldies is spotlighting Andy Kim with his Voice Your Choice feature. Just click on the link below for the details.

Once there, please choose your favorite of the songs shown in Michael's poll, and he will play the winning song on his show.
Posted by Laura Pinto at 12:33 PM No comments:

The official blog for legendary songwriter-producer Jeff Barry ("Tell Laura I Love Her," "Baby I Love You," "Be My Baby," "Chapel of Love," "Sugar, Sugar"). This blog is run in conjunction with Jeff Barry: The Man and His Music, Jeff's official fan site. 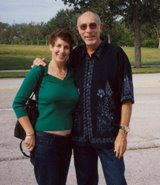